Lessons on Producing Documentaries from the film “Don’t be Nice” 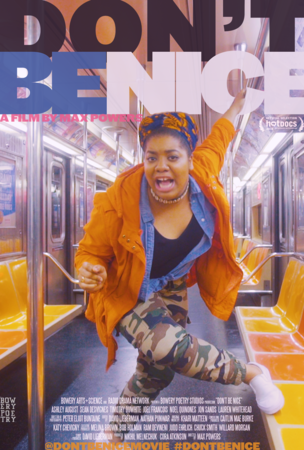 Offered in partnership with the Guelph Film Festival

Details
Friday November 2nd, 2018
2pm-4pm
This session is free for Ed Video members and Guelph Film Festival Passholders
$30 for non-members (plus HST)
Register by sending an email to angus@edvideo.org
NOTE: "Don't be Nice" will screen on November 1st at 6:30pm as the GFF pre-festival opener.
Description
Producer Cora Atkinson will share experience from the making of the film “Don’t be Nice” (and other projects), with a particular focus on the role of the producer in navigating sensitive subject matter and working with subjects in the field.
Participants will be invited to discuss their own projects and work through their own challenges with Cora and the group.
This workshop is open to all skill-levels, but is primarily intended for those who have previous experience in documentary making (at any budget level).
Technical aspects of filmmaking will not be discussed in this session.
About the Instructor

Cora Atkinson is a producer and filmmaker.  Her many years of experience has afforded her the opportunity to work with some of the world's top media companies such as Radical Media, VICELAND, National Geographic and MTV. She also worked for GMMB a political ad firm based in Washington D.C. which was one of the agencies of record for the 44th President of the United States of America Barack Obama.

In 2018 she produced the independent documentary film “Don’t Be Nice” chronicling the lives of 5 young black poets creating art, protesting the status quo and competing for the National Poetry Slam.  It was an official 2018 selection for Hot Docs Film festival and AFI selection.