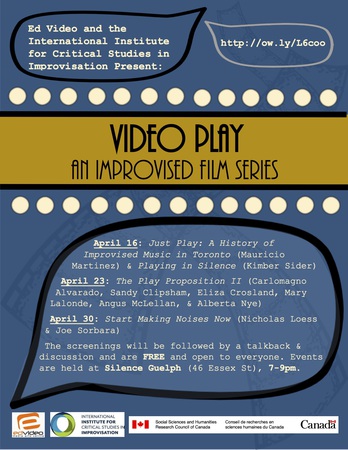 All events in the Improvised Video Series are FREE, and open to everyone.

Time: 7-9pm
Place: Silence Guelph
46 Essex St.
Guelph, ON
Institute for Critical Studies in Improvisation and Ed Video’s Play Proposition II for three
evenings of screenings and discussion on film/video and improvisation.
Video Play: An Improvised Film Series brings together filmmakers from the International
The series addresses both films on improvisational arts-based practices and improvisation in the filmmaking process.
Night Two: Thursday, April 23, 2015
Ed Video: Play Proposition II
Carlomagno Alvarado
Sandy Clipsham
Eliza Crosland
Liz Dent
Marilyn Kleiber
Mary Lalonde
Angus McLellan
Alberta Nye
Jerry Shallow
Last fall, Ed Video took note of the trend that the video and filmmakers that composed our membership had become much too serious in their work. Every shot and every edit were steps toward a finished project, which left very little room for play, experimentation, and the growth that can result from both.
Ed Video put forth a proposition to our membership: engage in play for twelve weeks. We challenged anyone interested to create a new video each week based on a series of concepts and technical themes, purely for the sake of exploring new ways of working and further developing their craft. We encouraged the creators to temporarily abandon their pursuit of digital perfection and create fearlessly. The results were often innovative, unique, and of course, playful.
Six of the participants of the Play Proposition will share a selection of the videos from the project and share their thoughts on creating new works inside this model.