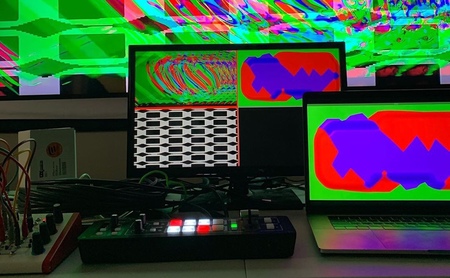 Ed Video has acquired some new video mixing toys! Come by the studio from 6:30-8pm on November 19th for a free experimentation session with our new video synthesis and mixing equipment.

The LZX Industries Vidiot is a complete instrument for analog video synthesis and processing. Use the Vidiot to generate live experimental video using only analog circuitry. The Vidiot can also accept composite video input from a camera or other source for signal processing, or an audio input for reactive imagery. The Vidiot is a video instrument made for experimenting.

The Modified WJ-AVE5 allows you to transition between two independently glitching channels of composite video in response to subtle human touch, contro voltage, knobs, audio or a magnetic patchbay. The modified WJ-AVE5 is a two channel NTSC composite video mixer with added digital corruption functionality. Glitch visuals include a number of digital fragmentation FX specific to the AVE3/5/7 FX buffer.

The Roland V1-HD Switcher features four HDMI inputs providing the ability to mix between two channels of video. The easy to use interface can be supplemented with computer control via the V-1HDRCS software. This switcher features a wide array of transitions and effects, as well as a robust audio mixer. Perfect for live mixing, editing, and performance.