The Image Makers is a regular gathering of video makers and cinematographers, where we work together to recreate a shot from a film or video. The emphasis of these events is on recreating the framing, lighting style, or visual techniques. We do not attempt to recreate the set dec, wardrobe, etc.

The June Image Maker was: Nicholas Crabtree with limited support from Angus McLellan

Our camera for this session was the Blackmagic Cinema Camera with Sigma 18-35mm lens. The clips were captured in film mode.

Session Goals
Our mission this month was to recreate a shot from P.T Anderson’s ‘There Will be Blood’. This shot is dark. The original scene reveals just one dim lamp in front of the subject, but does not show what lights are doing most of the work in the scene. This meant we had to guess, and we assumed that (in the scene) there would have been a bulb hanging above the character, and another light coming from behind.

Particularly of note in this shot is the reflected light in the character’s eye. It makes his gaze pop, adds a real tone to the scene, and perhaps suggests something about the character.

The Setup
This session didn’t have the kind of attendance we’re used to with the Image Maker’s sessions, which meant Nicholas took on most of the lighting himself. I threw in a few suggestions and aided with setting up the lights, but mostly stuck to my usual role as ‘awkward stand in’.
This first shot shows what the environment looked like with the fluorescent house lights on, before any studio lighting was added. The colour is a bit off because the camera’s white balance was set to 5600K, and the fluorescent lights are not 5600K.

The image without any production lighting.

Step 1:
Nicholas decided to begin the setup by lighting for the background. The light used was a Fiilex P360, with barn doors. This light was selected because the intensity of the light could be adjusted on the lamp body, and the throw of the light could be controlled with barn doors.
The light was focused at the shelf in the background, and he used the barn doors to limit the amount of light that would fall on the subject to a soft and minor amount.
The light was to camera left and above, about nine feet high.
Originally, the light was set to 5600K, but toward the end of the exercise the temperature was turned down to warm up the background a touch (in contrast with the cool foreground). 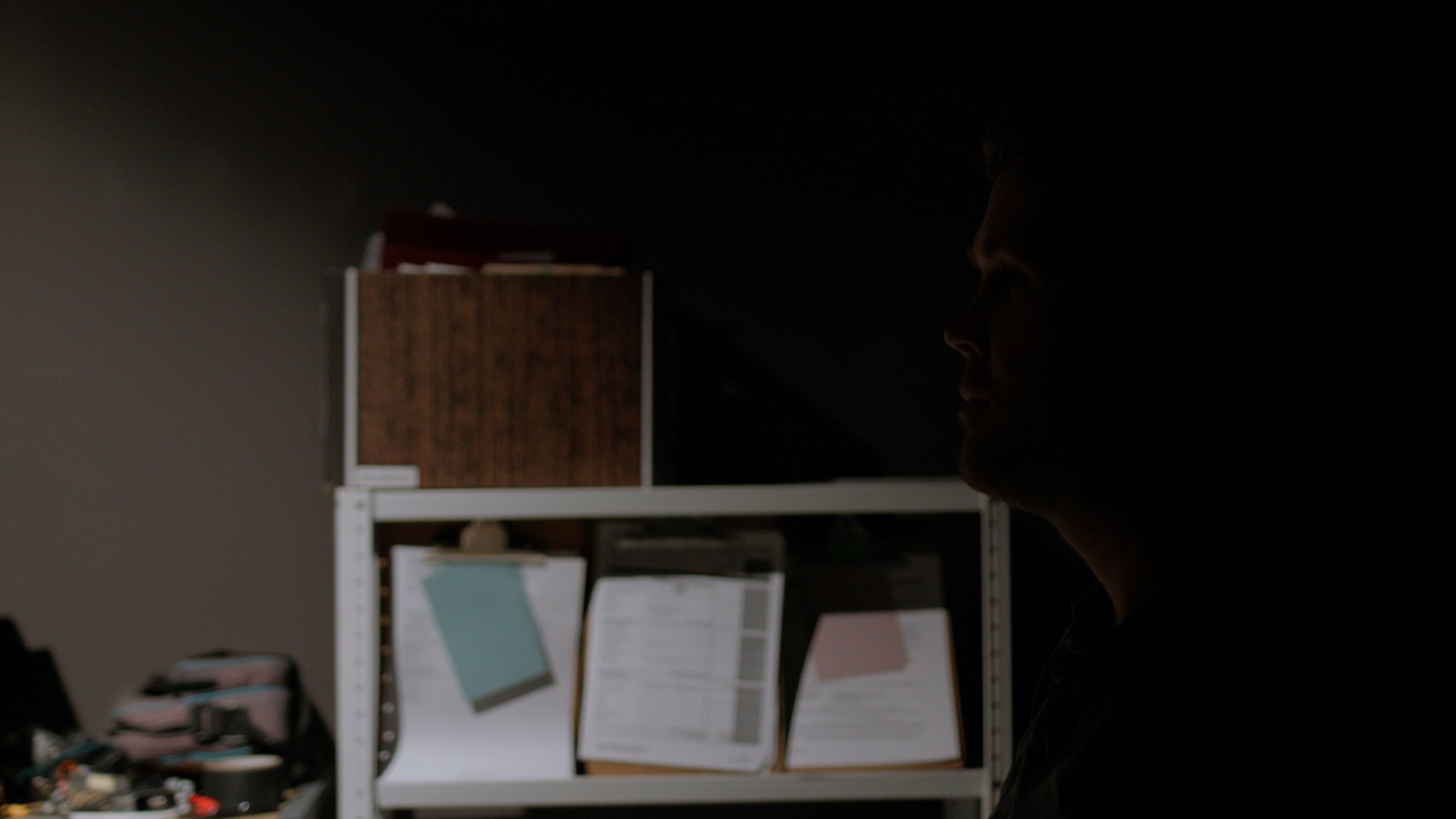 Step #1: lighting of the background (this image shows the effect of the light in isolation)

Step 2:
The next step was to light the character. There were a few identified challenges here: the light should fall on the top of the subject’s head, but also over the forehead and the nose, casting a vertical shadow from the brow down over the cheeks.
This proved to be the 2nd biggest challenge of the session.
A second Fiilex P360 light was positioned almost directly overhead, mounted on a c-stand with grip arm at about nine feet up. Barn doors were used to shape the light and stop it from falling on any unwanted areas. The light was set to 5600K.
We found that the shadows created with this lighting were pretty heavy, and not quite as they turned out in the original. So, we added a white reflector between the subject and camera, at camera left and angled the light slightly. This bounced some light from the key light back to the subject’s face.
We still found that there was some struggle achieving the intensity of light on the forehead and nose, while maintaining the contrast to the shadows on the cheek. 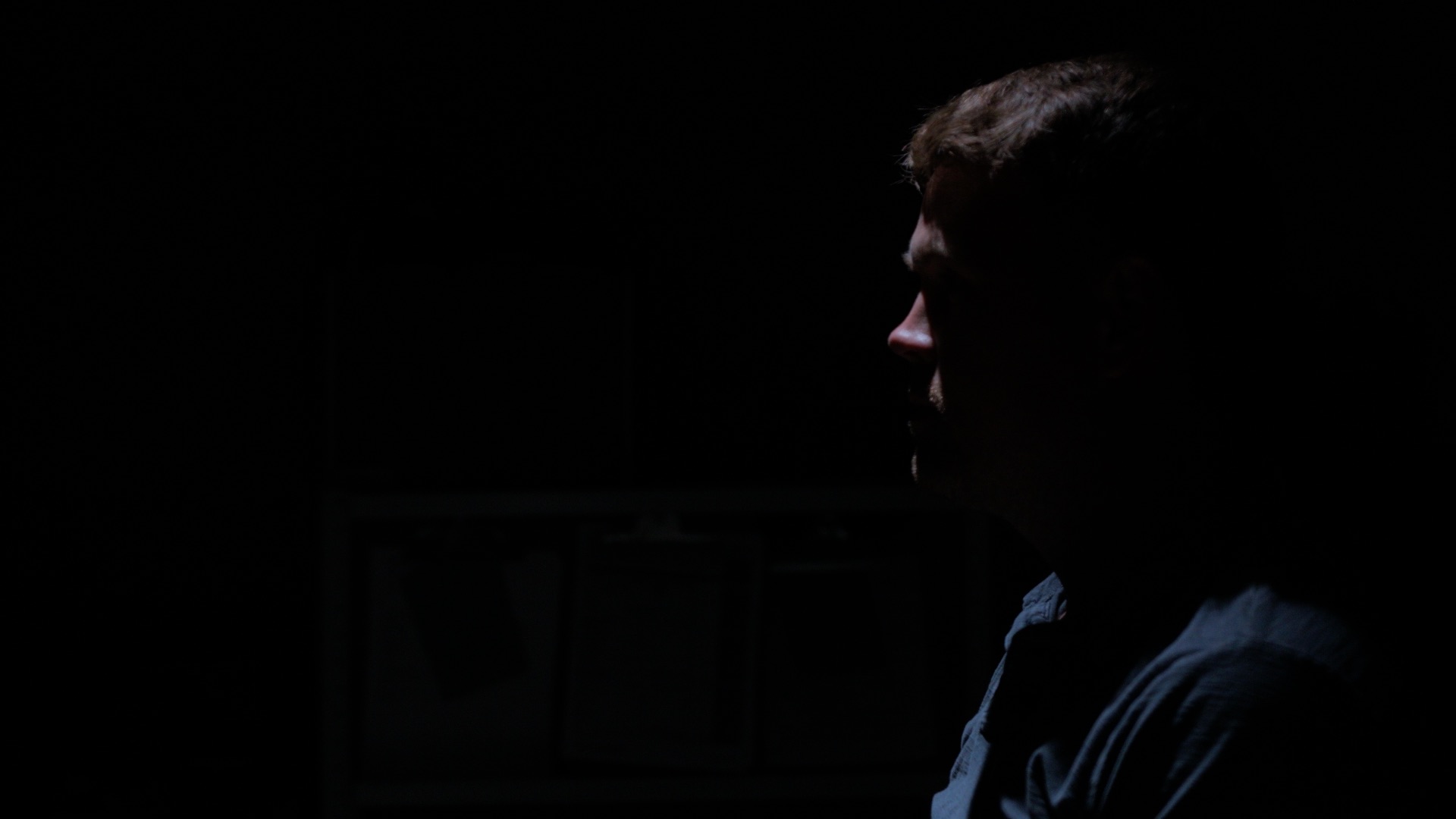 Step #2: Lighting the subject from above (this image shows the effect of the light in isolation) 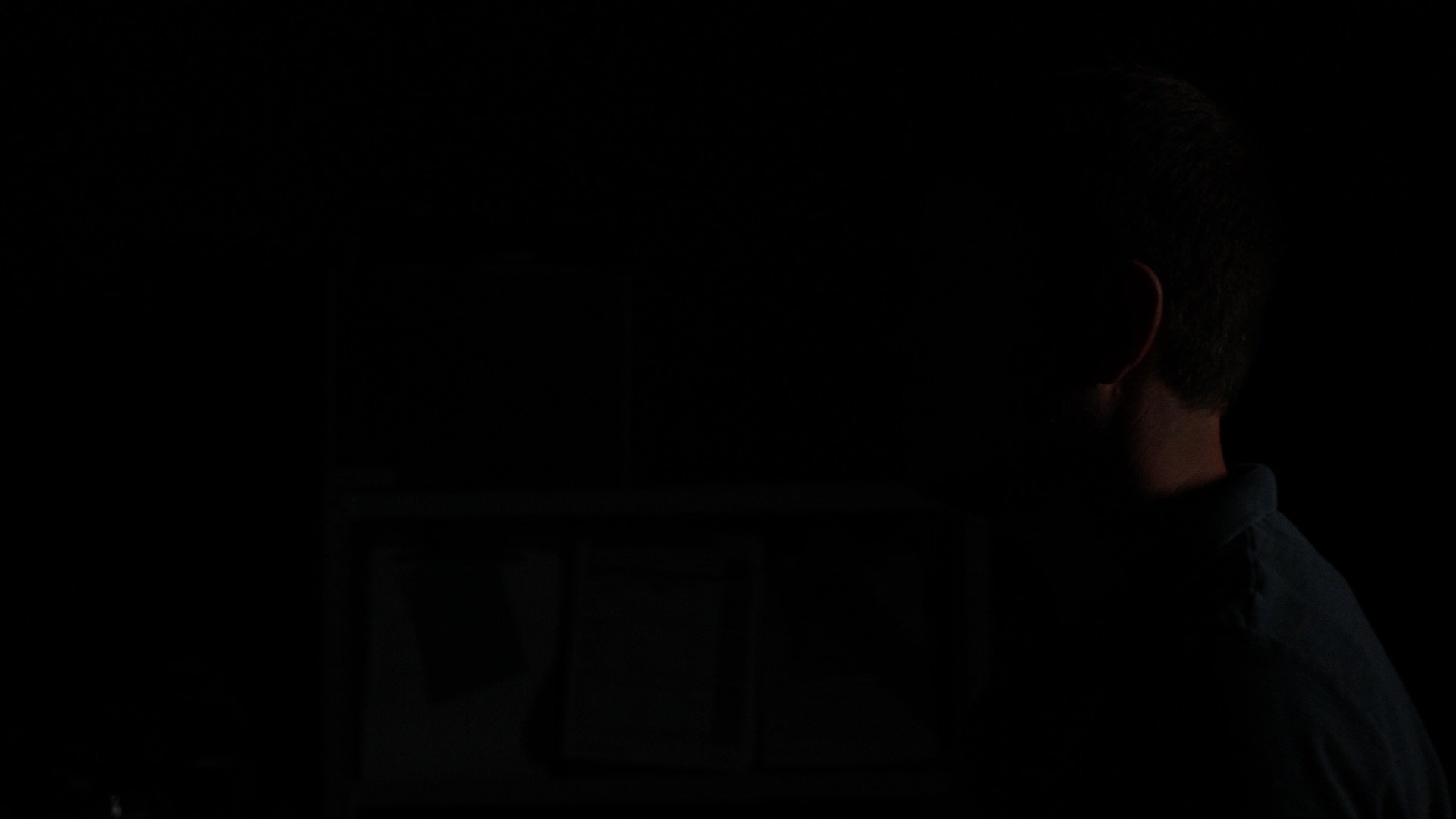 Step #3: Lighting the subject from behind (this image shows the effect of the light in isolation)

The final step before capturing our image was to try to achieve the glint in the subject’s eye. We tried to position a small light off to the side, reflecting light off the wall, a cell phone flashlight, but none achieved what was captured in the original, without also lighting the subject’s face in unwanted ways. We felt that it must be a very controlled light, or possible a small item reflecting light off camera.

Here is the final image:

The original scene is very cold and dark, and of vital importance to the film’s plots as it leads the main character to his story. Paul, the subject of our shot (portrayed by Paul Dano) is in an intimidating situation, both in that he is surrounded by strangers by is also verbally threatened. Yet, we can’t help but feel that despite he is the one in the scene that is holding all of the power.

I love the glint in his eye, and it is what drew me to use this shot in a session of the Image Makers. While the rest of the shot falls in darkness, that glint pulls our gaze to his eyes, encourages us to question his intentions, and appears just as the scene reaches it’s most important moment. It’s either an accident, or an example of master filmmaking.

Not only does that one little globe of reflected light add so much to the scene and to the complexity of this shot, it is also a technical challenge to pull off.

Unfortunately it did prove too much of a challenge for us to pull off in the given amount of time. That glint will haunt me, and one day we’ll recreate something like it an a session of the Image Makers.