The Image Makers is a regular gathering of video makers and cinematographers, where we work together to recreate a shot from a film or video. The emphasis of these events is on recreating the framing, lighting style, or visual techniques. We do not attempt to recreate the set dec, wardrobe, etc.

Our camera for this session was the Panasonic GH5 with Metabones Speedbooster and Sigma 18-35mm lens. The clips were captured in Cinelike D.

Our mission this month was to capture an interior car shot, looking at an image from ‘Pulp Fiction’ as a case study. Working inside a car is tricky: the lighting isn’t very good, the motion of the vehicle causes the camera to shake, and the enclosed space makes it difficult to capture wide shots.

After spending some time evaluating the lighting in the ‘Pulp Fiction’ shot was coming from, we moved on to lighting our own image.

Our goal was simple: to add lighting to the shot to make it look less flat and dark, without creating an unrealistic look. The group also wanted to set the shot up for motion, meaning that the car should be able to move with the camera and lighting in place. In this session, the goal was not to recreate the exact shot from Pulp Fiction.

We set up in the parking spaces at the side of 404 York Road, starting at about 7pm. The group opted to set up with the car in the shade of the building, so they could light for the inside of the car without the changing daylight affecting their work. After all, we started setup at 7pm, just as the sun was starting to set. 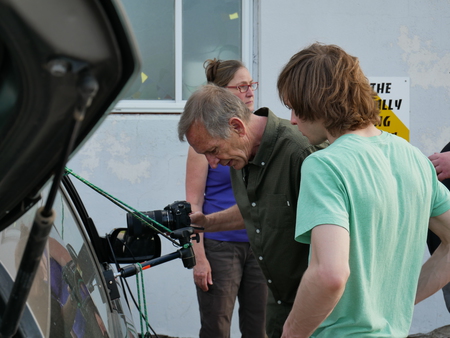 The first step was to mount the camera to the car. Since Ed Video doesn’t have a proper car mounting kit, we cobbled together a mount using a magic arm and multiple bungee cables. All agreed that the mount was a bit suspect, but good enough for this lighting exercise, especially if the car didn’t actually move.

The next step was to light the interior. This is where things got to be a bit tougher. Since our low-budget indie setup wouldn’t accommodate a trailer for the vehicle, electrical generators, etc, we had to figure out how to execute the lighting setup with battery-powered lights that would be mounted on the car. 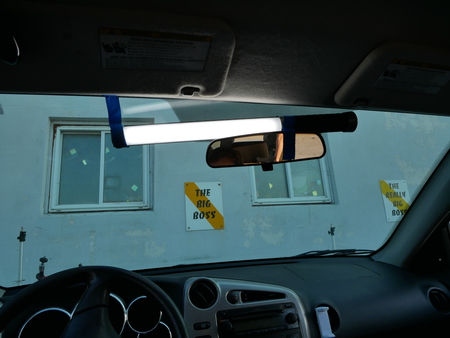 The participants went with a pair of Westcott Icelights. The Icelights are powered by an internal battery, shaped in a slim tube form, and low-weight. I missed the conversation about how to mount them to the vehicle, but it was decided that the lights would be taped to the interior of the car. One light was taped to the dashboard with gaffer tape (propped up by an empty juice box), and the other was taped to the windshield and rearview mirror. 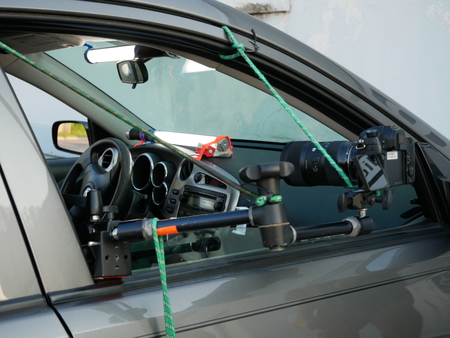 I have to admit that I was pretty unsure about how well either light would hold, but the lighting certainly enhanced the shot nicely. The subject (I stood in for talent) stood out well from the rest of the car, but in a subtle way. Perhaps just as importantly, this was achieved without making it difficult to operate the vehicle.

The setup seemed to be a success, but of course with a car shot you can’t be sure until you actually put the car in motion. After checking the security of the camera rigging (it was much more secure than it looked), I decided I’d take it for a short drive. I felt confident that the camera would hold, but I suspected the tape holding up the lights would probably fail, and they’d rattle free once the car was in motion. 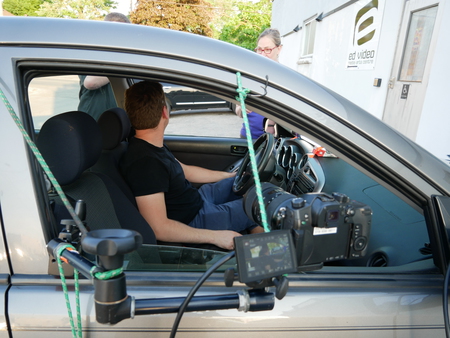 I drove the car a short way down the street, with one of the participants following along beside the car in case the camera rig failed. Fortunately, everything held tight. The magic arm that was holding the camera did shift slightly, but only just enough to reveal the tape holding up one of the lights.

The clip below shows the ‘before’ and ‘after’ with the lights set up. The two shots at the end show what the lighting looked like with the car driving into the direction of the sun set, and then driving away from the sun.

All in all, I’d say the session resulted in success. I would probably encourage more secure rigging for the lights and camera if this were a ‘for real’ production, but it worked for what we were doing that night.