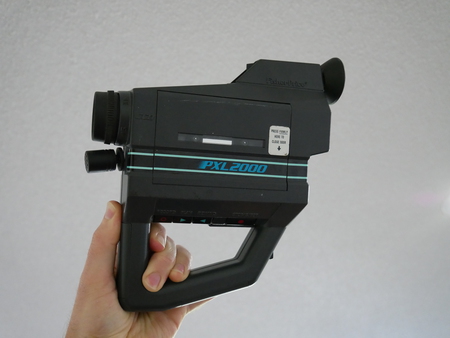 My interest in video making just barely predates the PXL-2000, and yet sadly it took me another 30 years to find out about this quirky ‘toy’ camera that captures low-resolution black and white video to audio cassette tape. Had my 7 year old self known about the PXL-2000 when it came out in 1987, it would have sat at the top of my Christmas list.

On May 23rd, we endeavoured to spend some time with the camera.

Now, in an era where video and filmmakers obsess about dynamic range charts, resolution, and colour quality, it might seem curious for any forward-thinking video maker to spend any time with the PXL-2000. Why would anyone today want to shoot low-res B&W on a toy camera when we have access to amazing technology that would have knocked the socks off of even Hollywood crews back in 1987?

Precisely because of that aforementioned obsession with technical specs. Because of the resolution race. Because the culture in video making has become so concerned about the technology that we’re forgetting that the video maker’s mind is the most important tool in their kit.

There is something charming, if not appealing, about the idea of using a device that eschews all of the great technological advances, forces us to rethink our priorities in video making, and because of the sheer simplicity of the camera, removes many of the technical distractions. It’s like filming on Super 8, only with audio cassettes instead of film stock. 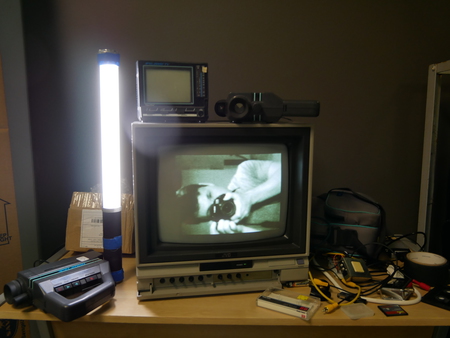 The PXL-2000 is a very simple device. It has an on switch, record and playback buttons, ND filter, and that’s about it. It records a short amount of video to an audio cassette tape, and only outputs a signal via RCA. It’s such a toy that it’s actually powered by AA batteries. Yet, many video artists and filmmakers have implemented the camera into their work at some point. There is even a festival devoted to films created on the camera.

The original plan for the session had been to tape a short video using the PXL-2000, but after some discussion we decided instead to figure out how to transfer the signal to a digital format for editing and possibly for an external recording.

One downside to the camera is that when you play the recorded footage back in-camera (the only way to play it back), the picture is significantly affected by signal noise, which is caused by the speed that the cassette has to turn at to communicate video at normal speed.

For some, this might be part of the charm of the camera. Some purists might even insist on doing all recording in-camera. We wanted to find a way to send a signal out so that the image could be captured externally, keeping all of that large pixel goodness without any of the playback noise.

Connecting the camera directly to the TV using an RCA cable worked just fine. The image was visible on the television, and appeared as a small box of video in the centre of a black screen.

Yet, getting the computer to see the same signal proved challenging. Because no modern computer comes stock with an RCA input (certainly no Mac), we had to convert the signal.

Our initial approach was to send the signal from the PXL2000 through an RCA cable into a Sony HDV deck (used for playing back mini-dv tapes), which then connected to the computer via Firewire. The chain looked like this:

This was a logical starting point because that is a system that is often used for digitizing other tape formats such as VHS or Beta. The HDV deck makes it possible for the computer to receive and ‘understand’ the signal.

No dice. Neither the HDV deck nor the computer could make sense of the signal.

Why? My best guess is that it didn’t work because of the low resolution of the PXL signal (120x90). The Sony deck couldn’t ‘understand’ what it was receiving, and didn’t transmit the signal.

Since the HDV deck was our only tool for translating the camera’s analogue signal into a digital signal, we had to keep that as part of the chain. So, we added a VCR to the chain, since we knew from previous experience that the deck would recognize a VCRs standard definition video signal. The chain then looked like this:

Still, it didn’t work. Like the Sony deck, the VCR didn’t understand or pass the signal along. We confirmed this by connecting the VCR to the television.

Contrary to what you might expect, when your chain of obsolete video devices refuses to communicate the signal the way you want it to, there is only one thing to do: add another obsolete device.

We switched the RCA cable for a Nintendo coaxial cable adapter. Remember the one that came with the original Nintendo Entertainment System?

And voila! It worked. Final Cut Pro and the Sony deck could see both the live and recorded signals coming out of the PXL-2000.

With that working we had hope for transferring the PXLs analogue signal to a digital video file that could be edited or at least uploaded.

Unfortunately, the signal noise caused by playing back was still an issue to contend with (or not, if you’re a purist). With the first objective met, we moved on to finding a way to capture the signal using an external recorder.

*Spoiler: we didn’t fully achieve this, but we have some ideas.

The options for this would be dictated by the context of the taping. If recording “in studio” it would be easy enough to use the above workflow to record live directly to a computer, to a mini-dv tape in the HDV deck, or to a VHS tape in the VCR. By doing this, you could capture a signal from the PXL that was free of the playback signal noise.

But in the field? Obviously, you wouldn’t haul all or any of the above equipment out into the real world. The load would be too cumbersome, and you’d need electrical outlets to make it work.

Our best bet was to find a camera that could accept and record an RCA signal, but none of the cameras we have on hand do that. Even looking back at cameras Ed Video previously owned, very few of them were able to accept a signal from an external player. That kind of functionality has always been rare. Cameras like the Panasonic DVX100 come to mind.

After attempting to record directly to DVD using an standalone DVD recorder, but without success, we called it and decided to try again another day.

Still, the PXL2000 calls to me. I fantasize about working on a very short video project with the camera. Something that can be shot over an hour or two and pieced together in editing. The camera’s unique aesthetic could be ideal for some video art projects, but I think it could also be an interesting tool for people making video essays, low-fi docs, or even genre films. It might be fun to try to weave the camera itself into a script, and see the story unfold through the lens of the PXL-2000.

I like the idea of letting go of technology and focussing just on content. Of course, the trick is knowing when the technology matters and when it doesn’t, and using the right technology for the job at hand. So, I’ve added a new bullet point to my ever-growing list of creative goals: find a project that warrants those gloriously jagged pixels of the PXL-2000.