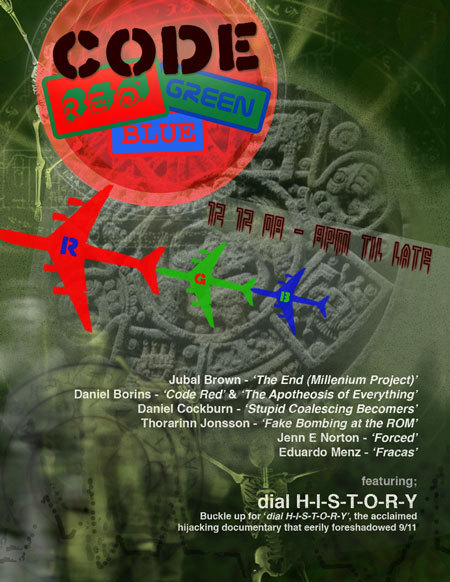 Standard definition video is a low-resolution, subjective rendering
of the truth. The viewer must extrapolate this truth by reading
between the pixels, using video as their witness to distinguish
fiction from reality. As the study of ‘conspiracy theories’ moves
from the fringe into the mainstream, it is the veracity of the video
signal that is often at the forefront of the debate. Video purports to
delineate the facts surrounding the pivotal events of our time.
Examining the video signal is foremost to those investigating the
actualities of the accept course of recent historical events. Each frame
is analyzed in an attempt to extract evidence, in order to reach the
desired conclusion. How much truth can be found in the 76,800 dots
of colour that create a web-sized video?

The artists presented in ‘Code Red Green Blue’ use video to take a
barometer reading of the present complex political climate. The works
chosen reveal the construct inherent in the video signal, and urge the
viewer to question the authenticity of the illusion. These videos have
the courage to comment on terrorism, tyranny, and totalitarianism, in a
time when politics in contemporary art is often considered passe, didactic,
or just too frightening to confront.

An open discussion will occur after the screening and into the night to allow
the audience to respond to the work. Participants are invited to debate the
difference between ‘conspiracy theory’ and ‘reasonable suspicion’, and
between skepticism and paranoia, using notable video clips as the basis
for the conversation.