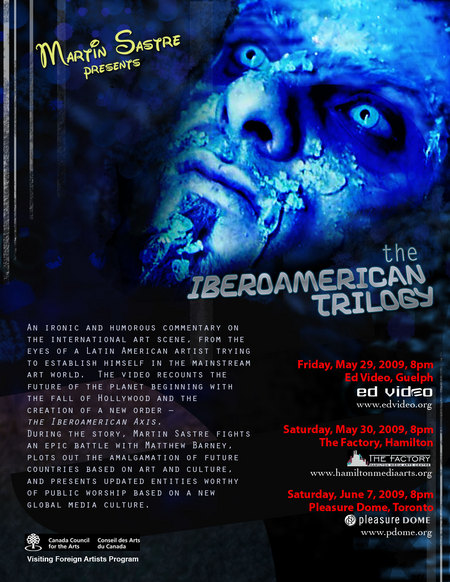 Ed Video will be presenting the Canadian premiere of the brilliant video work
of Martin Sastre. Born in Uruguay, and now residing in Madrid, Martin has been
collecting numerous accolades over the last few years in South America, the
United States, and across Europe for his work. In 2004 he won the First Prize for
a Young Artist at the prestigious ARCO Art Fair in Madrid. That same year, ‘The
Iberoamerican Trilogy’ was selected for to represent Uruguay at the Sao Paulo
Bennenial. ‘The Iberoamerican Trilogy’ is an ironic and humorous commentary on
the international art scene, from the eyes of a Latin American artist trying to
establish himself in the mainstream art world. The video recounts the future of
the planet beginning with the fall of Hollywood and the creation of a new order –
the Iberoamerican Axis. During the story, Martin Sastre fights an epic battle with
Matthew Barney, plots out the amalgamation of future countries based on art and
culture, and presents updated entities worthy of public worship based on a new
global media culture.

Canada Council for the Arts

Click here for pictures from the Ontario Arts Council