(a short parenthesis in a long period) 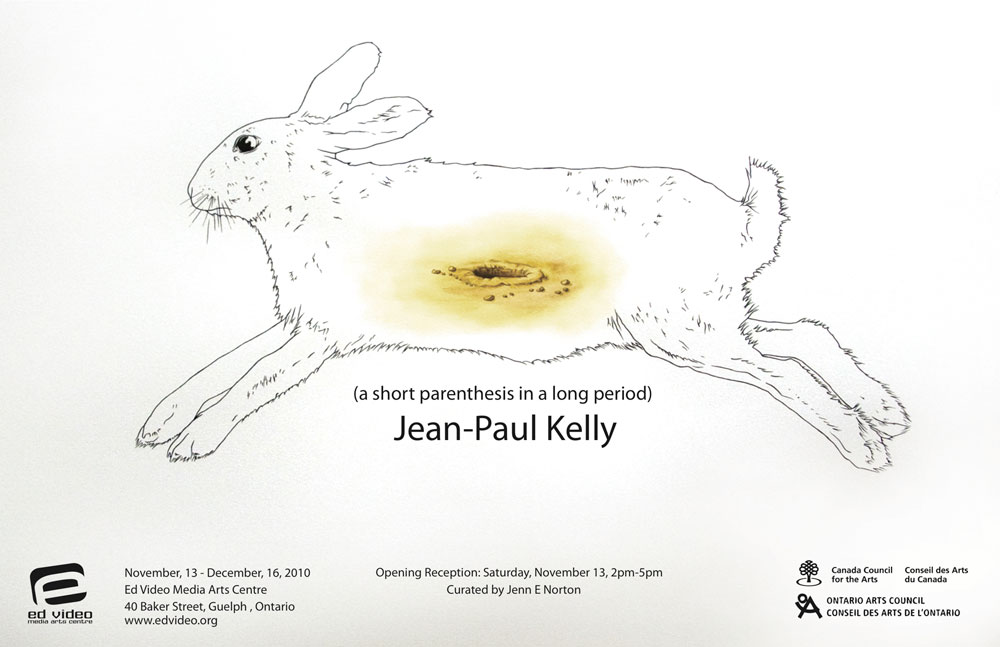 Jean-Paul Kelly is a Toronto-based artist. He creates drawings, photographs and videos, often displayed together as installations. These exhibition projects engage with issues of representation and subjectivity through Kelly's exploration of contiguity, allegory, and replacement. He has had solo exhibitions at Gallery TPW, Toronto (2008) and at Ed Video Media Arts Centre, on November 13, to December 16, 2010. His work has been included in group shows in North America, Japan, and Europe, most recently in "Showcase.09", *Cambridge Galleries (2009). Under the collective moniker Fennel Plunger Corporation, Kelly has collaborated with artists Steve Reinke and Anne Walk on exhibitions at Gallery TPW (2005) and Mercer Union, Toronto (2010). www.jeanpaulkelly.com Ed Video is thrilled to feature the videos, photography and drawings of this multi-talented artist and curator. Some of the charming lures woven into his pristine line drawings are the bitter-sweet nostalgic references of postwar American animation partnered with Lacanian theory. The union of these two disparate allusions evokes the uncanny, a trait that bleeds throughout the exhibition, which examines how trauma is perceived through representation. The familiar relationship we share with domestic content in the work is made strange through Kelly's hybrid parings, both formally and contextually, as exemplified with drawings of upholstered pets, cushions that extrude bones, a car billowing smoke entitled, Chrysler (Dad). This dissociative tension in the work transports the viewer to a larger narrative than what the nostalgic references belie, a narrative of recent traumatic events, and how they are documented.

"Eternity is not an everlasting flux of Tyme; but Tyme is a short parenthesis in a longe period; and Eternity had been the same, as it is, though time had never beene" -John Donne, Devotions Upon Emergent Occasions-
Article about the exhibit in The Ontarion