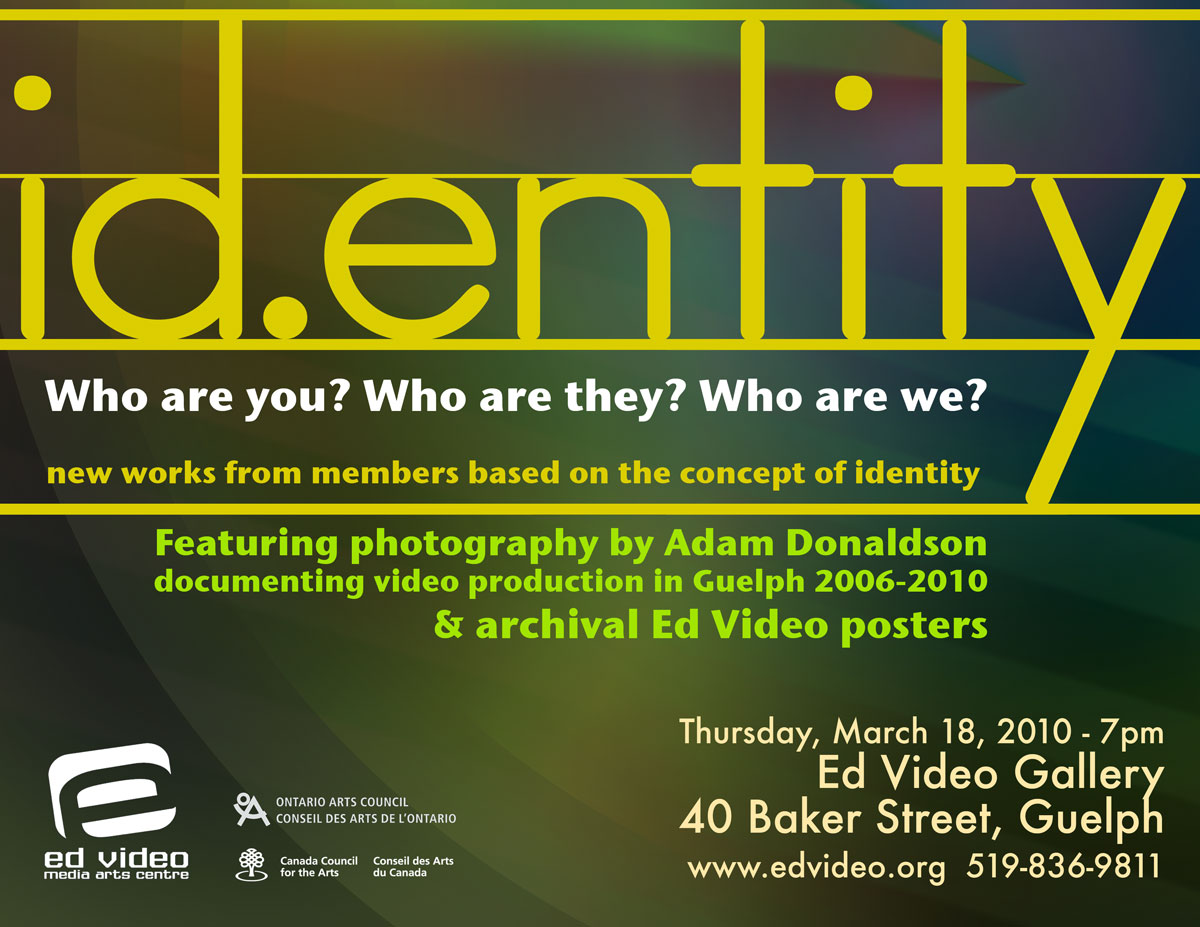 Who are you? Who are they? Who are we?
Ed Video Media Arts Centre presents "Id.entity”, a screening of works made by Ed Video members based on the theme of identity.
The screening of "Id.entity” will begin at 7pm on Thursday March 18th, and will be held in Ed Video’s gallery space (40 Baker street, Guelph).
The following artists and video makers are scheduled to present work at the screening: Rajee Jejishergill, David Courtney, Valerie Senyk, Jim Riley, Mary Lalonde, Elizabeth Dent, Louisa Kratka, Jenn E. Norton, Thoreau Bakker, Lynda Walters, and Tyler Young. A number of the artists will be in attendance.
The screening will accompany a photo exhibit from Adam Donaldson, which presents several years of film and video productions by Guelph media makers.
The "Id.entity” screening is the culmination of a year-long member production project. Each year, Ed Video encourages its membership to create a new work based on a common theme. Past projects have included themes such as "How Low Can you Go”, "Shakespeare made in Canada” and "Fork in the Road”.
Admission to the "Id.entity” screening is free, and the general public is invited to attend. Interested parties can call 519.836.9811 for more information, or arrive at 7pm for the screening.
Descriptions of the videos
"Mamaji” by Rajee Jejishergill
Rajee Jejishergill’s current interdisciplinary art practice explores her tri-cultured upbringing’s impact upon her sense of self.
The conflicting influences of her mother’s Filipino heritage, her father’s Indian heritage and Rajee’s growing up in Canada have had a profound affect on her consciousness and identity.Through storytelling, via the mediums of textiles and video, Rajee delves into personal issues concerning memory, identity, family life, and family history. Documenting her revival of spinning cotton with a charkha, this video considers Rajee’s artistic practice’s potential to underscore the ethereal bond between her and her ancestors.
"Time is a Force” by David Courtney
The older I get the more I navigate by synchronicity. It’s a very special frequency- synchronicity. And it’s only through synchronicity I can understand why Chelsea Campbell decided to work with me. Besides helping me paint a studio trailer and helping me move paintings out there, she managed to bring herself into my consciousness as a real deal. Something in her kept emerging through the experiment.Eventually I began to recognize a thoroughly complicated and stunningly articulate wise one. She reminds me somehow of the Existentialists, a knight of faith, not afraid of dangling over the abyss of her own uncertainty.
Reaching into the very heart of art, she pulls herself into time, with the nerve of someone who refuses to be taken prisoner.
"My Chinese Family” by Valerie Senyk
Valerie Senyk is a professor of Theatre Arts, a member of the Playwrights Guild of Canada, an actor and a performance poet.
Her film, My Chinese Family, was meant to be a simple little project, but then she found she had waded in too deep to go back…
She currently lives with her husband in Guelph, Ontario, and is the mother of three fine sons.
"inside his mind” by Jim Riley
"inside his mind” began with the artist’s reflections after a day of bicycling with his fourteen year old nephew.  In this artistic investigation about the beginning of the transition from boy to man, Riley blends documentary evidence and social commentary.
A boy's face appears, bringing us closer and closer to him until we are able to see inside his eye and his mind.   Once inside his mind, we see a slowly moving image moving towards us.  Four symbolic words appear, one at a time, and then vanish.  The image passes us by.  The boy, himself, fades away.
"Curious George” by Mary Lalonde & Elizabeth Dent
A short clip of a man having fun, and how that can go wrong. This work was scraped from the cutting room floor of "The Boobytrap". The whole sequence was cut because it had "identity issues".
"Oblivious” by Elizabeth Dent
It's pretty easy to go through life only understanding in retrospect. Life happens, whether you are paying attention or not.
"Environmental Exile” by Louisa Kratka
Louisa is a self-exiled Hamiltonian who now lives in Guelph. Her work on artist health and chemical contaminants in urban and occupational settings begins by examining a personal narrative and two factors contributing to environmental illness.
This short video explores identity through a personal narrative that examines Louisa’s complicated relationship with her hometown and her need to move away in order to live a life inhaling fewer industrial toxins. The video serves as a starting point for her research and activism on artist health and chemical contaminants in the urban, occupational and global environment.
"Very Good Advice” by Jenn E. Norton
Locating herself slyly in that world that is "through" the Looking Glass, Toronto-based artist Jenn E Norton inhabits the digital equivalent of Wonderland with her new work "Very Good Advice". She's not quite here and yet not 'away' either.  It's up for discussion.  Vulnerable in the way that small urban animals are, she rests in a space of both incipient danger and latent redemption.  Will she stay or will she go?  Either way, it's a lovely ride, full of lithe humour and visual delight, tempered with the dark side potential for total annihilation lurking, if not on screen, at least in our imagination.
"Out” by Tyler Young & Beth Anne Fischer
A performance piece that speaks for itself.
"5 Questions” by Thoreau Bakker
49 people questioned on the streets of Guelph.