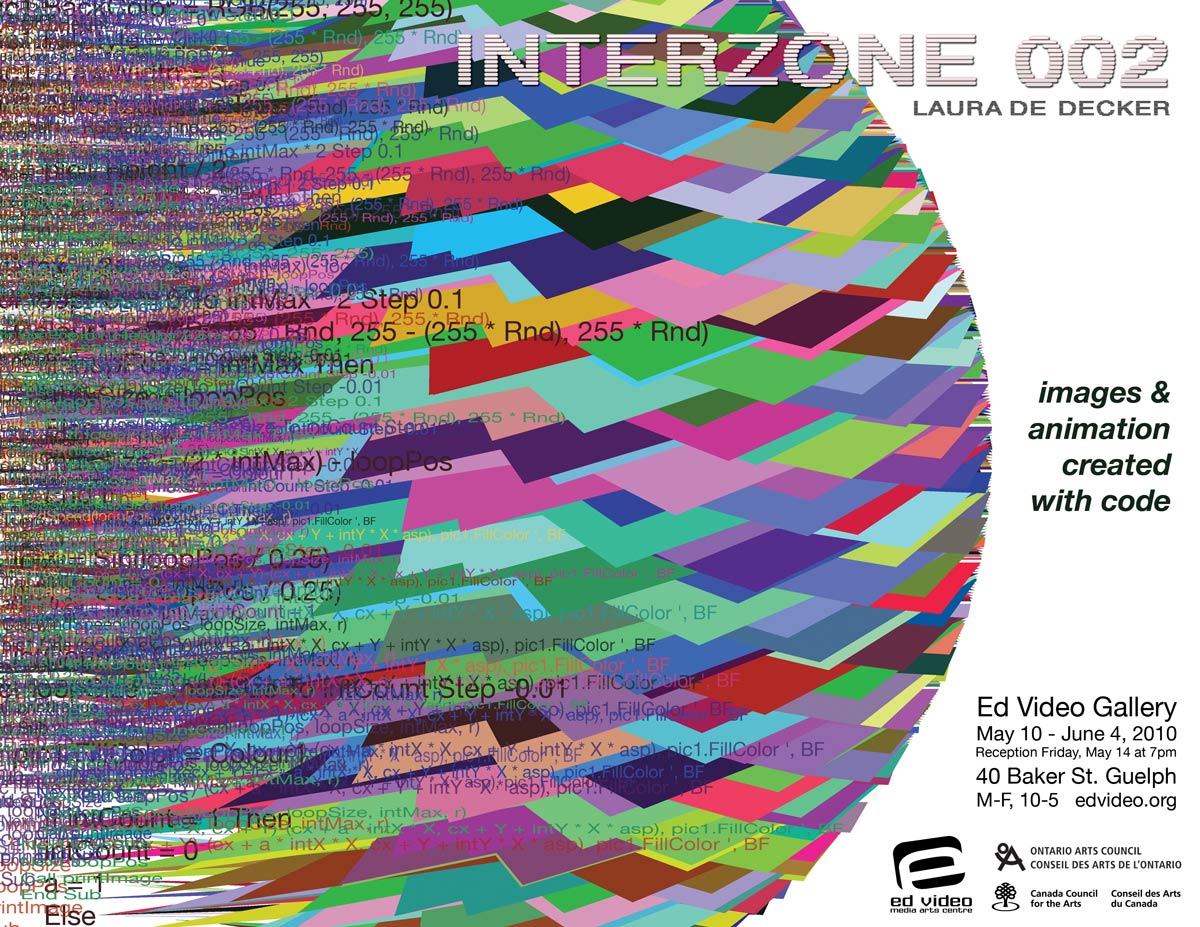 A conversation between Laura De Decker and Scott McGovern

Scott: I was going to ask this later on but I’ll ask it first. Why do you call your exhibit Interzone 002? Does it have anything to do with William S. Burroughs or the idea of an international border or free zone?
Laura: Right, Interzone was the working title for Burroughs’ Naked Lunch. I’m sure there’s some sort of cross over between those ideas and I suppose I’m talking about it in terms of almost everything.  I’m interested in investigating the territory that’s conceived of as being between what we traditionally think of as opposing things. For instance in this work, I’m playing between using spherical coordinates and Cartesian coordinates.
I think part of it is also that I find it very difficult to name a show.  It’s often the same with my code and my images so if I find a way to name things it makes my life a lot easier. So I found this word that’s fairly unique and it describes something that’s important to my work and by numbering it I don’t have to worry about naming my show every time.
Scott: I feel like I can understand that a lot. Artists are often expected to apply words or titles to creative actions and I don’t feel that’s always a necessary thing. Art is a primary language on its own, and it’s
already making its statement and defining itself.  The onus of calling it something can be limiting.
Laura: And also the idea that the arts are vocational or practical disciplines rather than academic ones, whereas I don’t see a difference. I think that also plays into the Interzone ideas, I don’t see the boundaries between the two. I believe they’re both intellectual endeavors.
Scott: So let’s talk a little bit now about your methodology.  How do your images go from an idea in your mind to their final form?
Laura: A general theme develops in my head before I start working on a body of work. It comes out of strategically trying to figure out what direction will open up the kinds of possibilities that I want to explore. I think that my focus this time is interesting because it contrasts with the assumption that colour follows form; my interest in form is really driven by my interest in colour and looking for new ways to investigate colour.
In previous shows I engaged more with colour and used more fundamental forms, some still quite elaborate, but were mostly based on hexagons or concentric circles as targets, and I felt the intuitive need to
advance my work by creating more elaborate forms and to understand form better. In that way I became more interested in the space between Cartesian and spherical coordinates which stemmed from Interzone 001 where I was using hexagonal shapes. In order to connect the two I had to create my own coordinate system.
Scott: Well then let’s talk about the technical side about how your images are created. How did you create the coding, and explain how it occurred to you?
Laura: When I started my Master’s program I was mainly painting and doing some sculpture as well.  I‘ve been interested in colour, honestly, my whole life; I’ve always been fascinated with it. There was a point in my Master’s program where I realized that I felt limited with paint for what I wanted to do with the medium.  I just happened to have this program, Visual Basic 6.0 because I had a sense that there was a lot of potential with computer programming for an artist, and my dad, who had some experience with BASIC, recommended it to me.
Scott: When you first got this program what did you originally have it for?  Did you discover later that you could use it for your artwork?
Laura: What drove me to learn it was its potential as a tool to investigate colour. I think I knew it had the potential to create images. In the short term I wanted to learn about the program so I could explore colour in a way that I would be unable to, or would find very difficult, with paint or with paper or anything in the more physical world.
Scott: When you were a painter what was your subject matter? Do you feel your work now is a continuation of your past artwork? Was there was some kind of crossover?
Laura: In some ways yes, I was interested in the abstract and abstraction but I had more of a focus on kitsch during my undergrad studies and part-way into my Master’s program.  I think I was more fascinated with the colour in kitsch and maybe that fascination has translated into my current work relating to preferences in the aesthetics of certain colour combinations. I really want to make beautiful things, using colour. 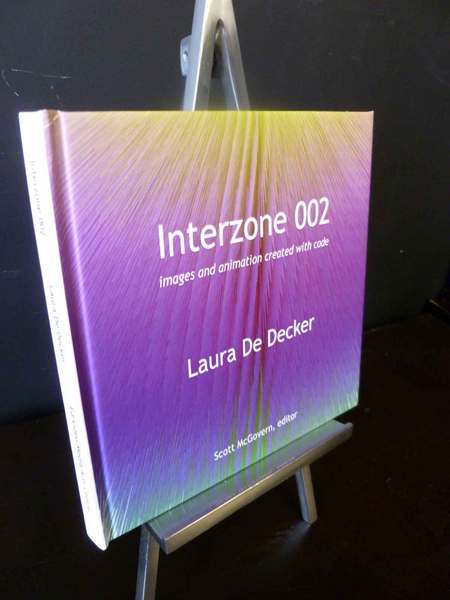 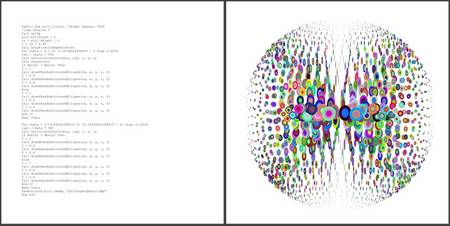 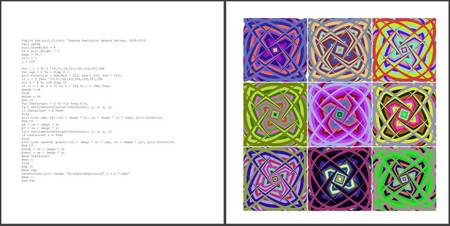