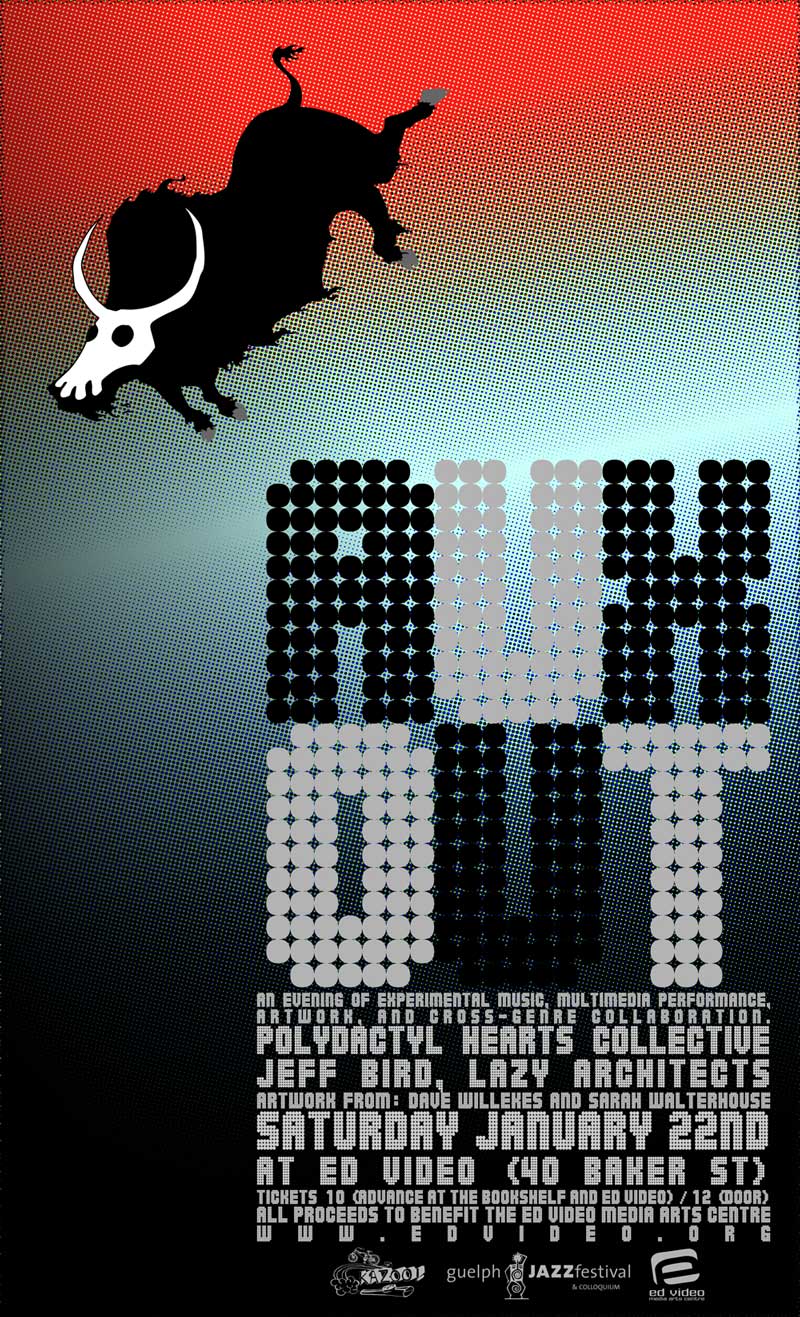 Tickets $10 in advance at Ed Video or the Bookshelf, $12 at the door

Co-presented by  Ed Video, Kazoo!, and The Guelph Jazz Festival

Polydactyl Hearts Collective performing RGB Polydactyl Hearts Collective are a Guelph based media arts collective exploring the intersections of art, music, and technology. Formed in 2007 they have created two full length media projects, their 2008 'graphic novel bike opera' Le Cyc, and their award-winning stop-motion animation and music collection, Hello Adventure (2010). This performance marks the debut of 'RGB', an improvised performance featuring live animation by Dave Willekes. In this set, instruments are controlled and directed by the colour (Red/Green/Blue) content in the projected artwork. The artist controls the group in real-time like a conductor while the custom-built software allows him to evolve the animation by hand, frame-by-frame. He must be wary of the tight integration between visual change and auditory effect, acting both as artist and sound designer in this interesting and playful piece. Jeff Bird performing 1000 Fiddle Tunes Jeff Bird is a filmmaker, media artist and musician who has performed in many legendary Canadian projects such as the Cowboy Junkies and Tamarack. In a new multimedia project, Jeff Bird returns to his folk roots by bending the world of traditional fiddle music. Combining multi-screen projection and live performance Jeff will explore the fractal nature of traditional fiddle music. The Lazy Architects is a creative workshop for people who like to explore. At the heart of the group are a handful of musicians and one visual artist currently or formerly based in Guelph, Ontario: Sam de Martigny (tenor saxophone), Josh Doerksen (voice & electronics), Taylor Moran (live sampling, processing & electronics), Steve Sladkowski (guitars), Sarah Walterhouse (visual art), and Claire Whitehead (violin)—however the group often takes on a collective mentality, inviting our friends to improvise with us. We are people who explore the improvised aesthetic through spontaneous live performances of art, music, and sound. The formative and basic idea for the group is simple: improvisation is something that permeates all forms of art—whether that be dance, visual art, music, or writing—and is proof that any divorce between these artistic disciplines is wholly artificial. Every time you see the Architects, the music and visuals are a result of creative individuals spontaneously interacting with each other—improvising together. What started as a series of basement experiments across artistic disciplines quickly transformed into a DIY approach to improvising: the group has played house shows, concert recitals and experimental venues while its individual members have played jazz festivals, toured with indie rock bands, been community organizers, and done whatever it takes to spread the improviser’s philosophy. Dave Willekes As a member of Polydactyl Hearts Collective, Dave Willekes is the artist behind the graphic novel bike opera Le Cyc, and the stop motion animation piece, Hello Adventure. Dave Willekes has also had several solo exhibitions of his recent airbrush works. At this opening, Dave will be debuting a series of new sculptures. Sarah Walterhouse works in large abstract drawing with an integral emphasis on process and materiality with a consideration of line and mark. Sarah is also a founding member of the improvised music and art collective, Lazy Architects.

Review of show, "Drips of Paint, Sounds of Harmony" written by Josh Doyle for The Ontarion.