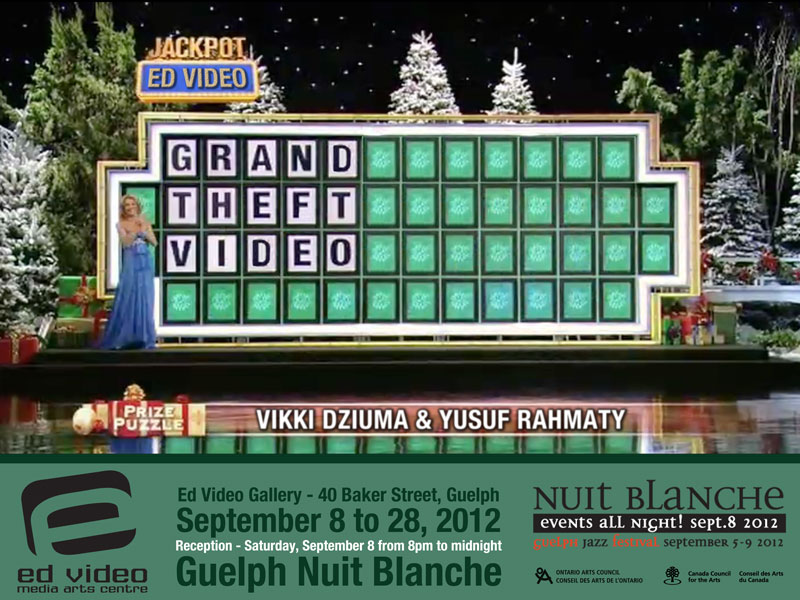 Grand Theft Video is an exhibition of works by Vikki Dziuma and Yusuf Rahmaty utilizing film and television as found objects. New narratives are imposed upon existing ones through contextual changes and manipulation of source material.  Vikki Dziuma's work uses repetition and anti-climax in an attempt to evoke humour.  Yusuf Rahmaty's work focuses on deconstruction, particularly of the concept  "leading lady," leaving it open to negotiation.  Each artist emphasizes a different aspect of appropriation; the discovery of implied narratives and the invention of wholly new ones. This exhibition, and appropriation in general, is the process of changing narratives, not necessarily by altering the the material but by changing the context in which it is found.

Vikki Dziuma is studying sculpture and extended media at the University of Guelph and will receive her B.A.H. in 2013. Her practice is influenced by familiar and shared experiences in popular culture. Components from film, television, childhood toys and structures are repurposed in order to interrupt a collective experience. Her work intends to challenge anticipated outcomes.

Yusuf Rahmaty is in his final year of a Fine Arts Honours degree specializing in photography, video, and mixed media with emphasis on appropriation art. Overwhelmed by the diverse assortment of images that have always besieged him, Yusuf’s work uses mass media as source material, creating new forms, and questions which icons are remembered and and which ones are forgotten.

Also happening at Ed Video Gallery for Nuit Blanche (midnight to 2am) :