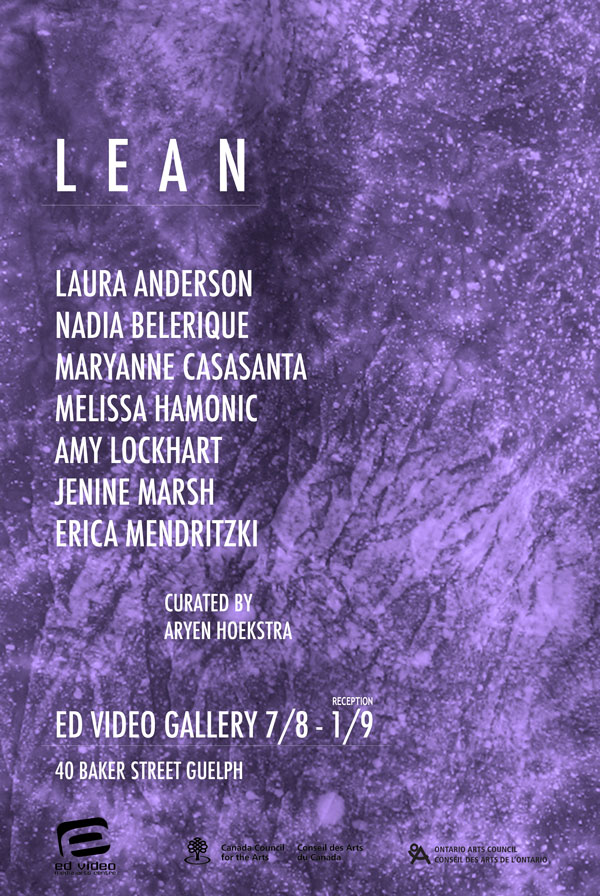 An influential feature of the Houston hip hop scene since the early 1990’s is the wide spread use of a recreational drug which mixes pharmaceutical strength cough syrup - containing codeine and promethazine - with Sprite or Mountain Dew. When consumed, the drink - referred to as Purple Drank, Sizzurp, Lean, Drank, Barre, Purple Jelly or Texas Tea - produces a drowsy, euphoric state in the drinker often accompanied by slurred speech and the feeling of needing to lean over. In an effort to emulate the "lean” of this high, Texas-based DJ Screw experimented with remixing the songs of fellow southern rappers by reducing the pitch of records, slowing them to between 60 – 70 beats per minute, while cutting two of the same, slowed records into one another producing a sound characterized by its choppy, repetitive drone that is now known as Chopped & Screwed.  Lean brings together artists whose work uses formal strategies including delay, repetition, and looping to adopt a posture that favours a slowed perceptual experience. The "lean” evoked by the work in this exhibition acts to disrupt expectations implied through their material and generic structures. In doing so, they share a formal language with DJ Screw’s remixes, while arguing for the deceleration of their consumption.