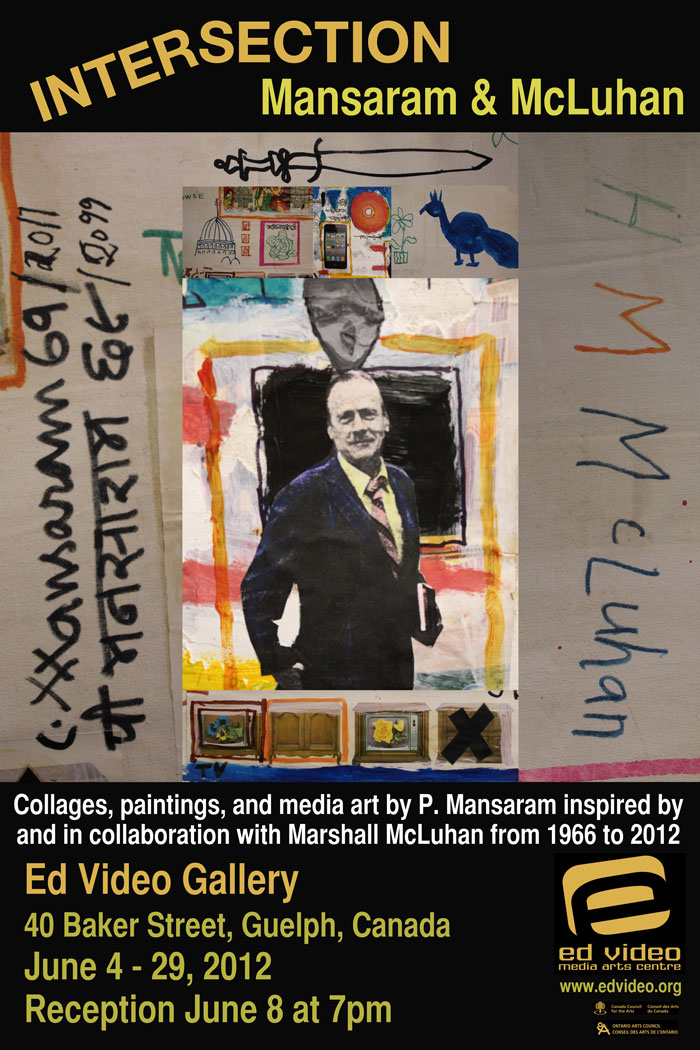 Collages, paintings, and media art by P. Mansaram inspired by and in collaboration with Marshall McLuhan from 1966 to 2012

Soon after P. Mansaram immigrated to Canada in 1966, he became friends with the influential media theorist Marshall McLuhan. A productive working relationship developed, leading to numerous collaborations on several projects. In the late 1960’s and early 1970’s, Mansaram’s work inspired and created with McLuhan was exhibited at the Picture Loan Gallery, and he organized happenings at the eminent Isaacs Gallery in Toronto. The Rear View Mirror series of collages, collaborative paintings, films, and audio were exhibited, and later toured the Atlantic provinces and India.  This same work, along with recent projects, will be featured at Ed Video Gallery at Intersection 40 years later.

Featured will be the Rear View Mirror series of collages created between 1966 and 1972. The collection combines elements from both Eastern and Western culture, a central theme of Mansaram’s work and McLuhan’s theories.  Parallels are drawn between the hyper-vivid and frenetic culture of India and McLuhan’s ideas about the complexity and influence of mass media. Intersection also features films and videos, covers he designed for McLuhan’s books, and displays of correspondence documenting their friendship. A surround sound audio installation created from an interview Mansaram conducted with McLuhan in 1967 is the audio backdrop for the exhibition. McLuhan discusses the prevalent ideas of that time - the East’s influence on the West, the hippie movement, the psychedelic experience, and how electronic communications change our perception of time and space.  Mansaram's work captures elements of McLuhan’s prophetic ideas that continue to define and clarify our media-saturated world.

CITIZENSHIP- Canadian
BORN- I was born in Mount Abu. This scenic part of Rajasthan, India, is where
Maharajas built summer palaces during Colonial rule. This is also famous for special Rock Formations, and for tenth/twelfth century Delwara Jain Temples, which some think to be more beautiful than the Taj Mahal.
EDUCATION- Sir J.J. School of Art, Mumbai, India 1954-59
1963-64, at the State Academy of Fine Arts, Amsterdam, Netherlands on a Dutch
Government Fellowship.
PRACTICE- My art practice has gone through various phases, and varieties of media, currently working in mixed-media, a special blend which I have termed as Mansa-media
1959- I created ‘Impressions from Nepal’ series (tempera on paper) shown at Jehangir Art Gallery in Bombay, for which I won first prize at the prestigious Bombay State Art Exhibition
1960- ‘Calcutta by Night’ series (oil on masonite) shown at the Artistry House in Calcutta
1966- Immigrated to Canada, where I met Marshall McLuhan and Av Isaacs
1967- Created ‘East West Intersect’, a multimedia concert at the Isaacs Gallery with
encouragement from McLuhan. I also made a five minute long 16mm film featuring Marshall McLuhan for this event
1970’s- Created a mixed media series of paintings, titled ‘Rear View Mirror’ (title
borrowed from McLuhan), including a collaborative art work with Marshall McLuhan.  This series of works were shown at the Picture Loan Gallery in Toronto in 1974, where Marshall McLuhan was the chief guest. In 1971/72, the exhibition traveled to seven galleries in the Eastern Provinces of Canada, and then to India at the Dhoomimal Art Gallery in New Delhi and Jehangir Art gallery in Mumbai in 1975
1970’s- I started working with fabric as collage medium. This eventually became mixed
media using xerography transfer, serigraph, blue prints, etc. These works were shown at the Taj Art Gallery in Mumbai, India House in New York, and Burlington Art Center, Burlington.  During this period I did pioneering work in Xerography, using black and white and colour Xerox and Blue Prints. I became member of International Society of Copier Arts in New York and contributed to their quarterly, featuring member’s creations in Xerography and bookwork.
1975- I had a collaborative exhibition titled ‘Duet’ with American artist Jim Ridlon of mixed-media blue prints on fabric and paper shown at the Art Gallery of Hamilton
1980’s- I did large format lasergraphic works, inspired by my immediate environment such as my backyard and school. I created works such as ‘Moving Landscape’ and ‘At the School Lockers’, a lasergraphic installation, and a series of works titled ‘New York-New York’ shown at the Piramal gallery in Mumbai, India.
1992- Air India Commission- Air India commissioned me to do a series of images
on India Destinations, to be used for a series of lasergraphic art posters.
1997-2007 - ‘Art on the Rocks’, a sight specific mixed media art on rock formations in Mount Abu, India.
2006- Retrospective at the Print Studio, Hamilton
1999-2008– created images in mansa-media of Indian cities, Pushkar, Delhi, Mumbai.
Banarasan exhibition was held at the Glenhyrst Art Gallery of Brant, and South Asian Gallery of Art in Oakville
2008/09- Created a series on Diversity in Ontario
2009- Created a series on Udaipurto shown at Bougainvillaea Gallery in Udaipur, India
2010/11- ‘Mahal Maharaja and Mansaram’ at Art Square Gallery, Toronto and at South Asian Gallery of Art, Oakville
2012- ‘Intersection, Mansaram & McLuhan’ at Ed Video Gallery featuring video, audio, mixed media works.  Also preparing for future exhibition of collages at JM Gallery in New York City

Interview with Mansaram on 'Silver Screen Dream Machine' on CFRU: