I Have No Memory Of My Direction 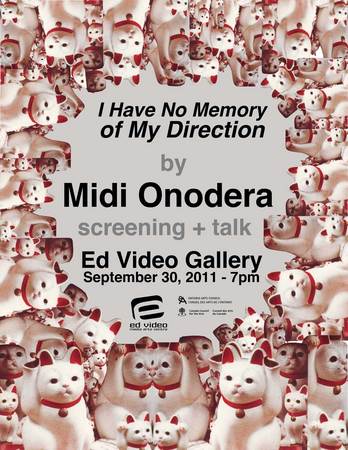 Join us for an evening exploring the cinematic terrain between memory and travel. Toronto-based video artist and filmmaker Midi Onodera will be at Ed Video for a screening of her acclaimed film, I Have No Memory of My Direction (2005), which was inspired by Chris Marker’s 1983 classic Sans Soleil.
Guelph-based video artist Nicholas Loess will host a Q & A with Onodera, discussing her film's relation to Marker's, cats, and memory.  Both films wrestle with the difficulties of representing and reimagining Japan across time and space. Both filmmakers situate memory as an indivisible and elusive mystery that continuously haunts the image-making process.