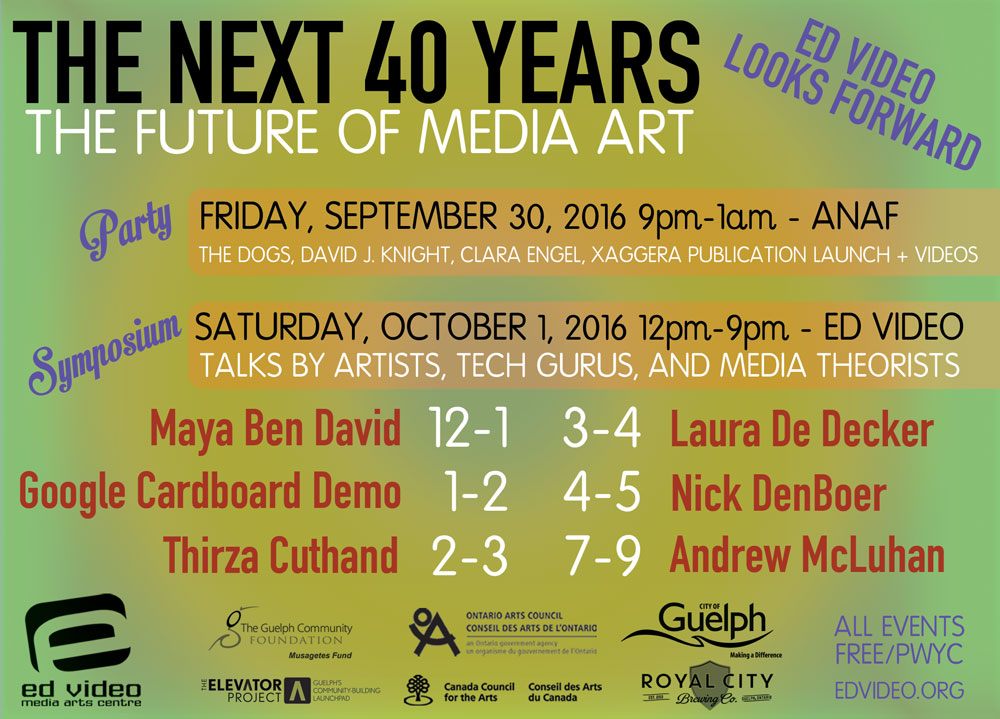 THE FUTURE OF MEDIA ART

Featuring musical performances by The Dogs, Clara Engel, audio and video art by David J. Knight, and live video projections from the archive.

Plus  XAGGERA Publication Launch by Fenylalazine with 22 local, national and international contributors.

ADMISSION TO ALL EVENTS IS FREE / P.W.Y.C.    FREE ED VIDEO GOOGLE CARDBOARD VIEWER FOR ALL ATTENDEES!

Maya Ben David is a Toronto-based video and performance artist. Through video she draws attention to moments in animation, film and popular culture that explore simulations of the “real” and sentience through appropriated and nostalgic media. Ben David's practice often explores online fan communities that involve anthropomorphized/sexualized fictional characters. Ben David is able to gender-bend and give new narratives to well known cartoon characters by making her own Fan Art and Cosplay in her digital work.

Maya Ben David (MBD) will present an artist talk about her video/performance-based practice. She will be focusing on the role of the “grotesque woman” in cartoons and cartoon-like objects and how these representations contribute to ideas of violence against women. She will be examining both physical objects such as the “rubber chicken” as well as animated cartoons. Much of the focus will be on the Pokémon franchise because of its vast use of anthropomorphism and because of Ben David's personal connection to it. Ben David will go into detail about how gender, femininity and race is constructed in the Pokémon universe.

Attendees at the Google Cardboard Demo/Workshop will recieve a free Ed Video Google Cardboard VR viewer!  After learning to assemble the viewer, participants can be the first to try two commissioned projects by artists JunJun Zhu and Theo Bakker.  After that, Ed Video's Technical Coordinator Elia Morrison will demonstrate how to make content for Google Cardboard using free software such as SketchUp and Unity.  If you've never experienced VR video, here is your chance to learn about the basic concepts and how you can use it for your own projects.  Bring your smartphone if you have one, but if not some will be available to share.

Thirza Cuthand was born in Saskatchewan, Canada, and grew up in Saskatoon. Since 1995 she has been making short experimental narrative videos and films about sexuality, madness, youth, love, and race, which have screened and won awards in festivals across Canada and internationally.  She completed her BFA majoring in Film and Video at Emily Carr University of Art and Design, and a Masters of Arts in Media Production from Ryerson University.  She is of Plains Cree and Scots descent, a Status Aboriginal (not Metis) and currently resides in Toronto.

Thirza Cuthand will talk about her experiences as a filmmaker learning about making a video game with the program Unity. She will discuss the challenges of moving into a different medium to tell personal stories, and the similarities and differences between making social change video games and films.

Laura De Decker received her BA in Art and Art History (University of Toronto and Sheridan Institute), an MFA in Visual Arts (University of Victoria), post-graduate diploma in Interactive Multi-Media (Sheridan), and taught at Sheridan Institute of Technology and Advanced Learning. Her work has been presented across Canada and internationally. She was Christie Digital/CAFKA (Contemporary Art Forum, Kitchener + Area) Artist-in-Residence (2012), creating interactive 3-D immersive environments. She completed a video animation commission for University of Waterloo’s Stratford Digital Media Campus’ thirty-foot-tall video wall in 2013. Laura received an Ontario Arts Council Chalmers Arts Fellowship grant for 2015 to work with Dr. Raymond Laflamme to learn about quantum phenomena. Her work is in private collections in Canada and Europe. Laura lives in Waterloo, Ontario, Canada.

Nick DenBoer is a video artist, producer, animator, editor, director, music composer, and remixer from Toronto, Canada. He specializes in producing comedy for web, television and advertising. Nick has spent the past few years writing, directing and producing comedy bits for CONAN on TBS where he has left his mark and helped shape the show with his cutting edge technical comedy style. Nick has directed and produced segments on many other TV shows both Canadian and abroad. He is also a prominent remix artist online and has produced viral content for the likes of OLD SPICE, VICE MAGAZINE, DC SHOES USA, MONDO MEDIA and many more large online audiences. Nick's short film "THE CHICKENING" a remix of Stanley Kubrick's "THE SHINING" premiered at TIFF in 2015 and graced the screens of over 50 other film festivals including Sundance.

Nick denBoer will speak on the "future of remix". Remix culture has become an important critical voice in response to the overwhelming amount of media that humanity creates each day. Remix culture is a driving force of new comedy, satire, technology, and copyright law.

Andrew McLuhan is the grandson of seminal media theorist Marshall McLuhan and son of Eric McLuhan, and has been working as Eric McLuhan's research assistant and student since 2009. He teaches Intro to McLuhan classes for elementary and high school students, catalogued McLuhan's heavily-annotated working library containing thousands of books, and runs a small boutique upholstery business in Prince Edward County.

Andrew McLuhan will deliver the keynote talk on engaging McLuhan as a McLuhan, and his journey in McLuhan research and studies to find a way of understanding the present and future by sifting through the past.

Many thanks to the main financial contributors: The Guelph Community Foundation Musagetes Fund and The City of Guelph through The Guelph Elevator Project.  Special thanks to Royal City Brewery, the ANAF, and David J. Knight.