Topology of a String 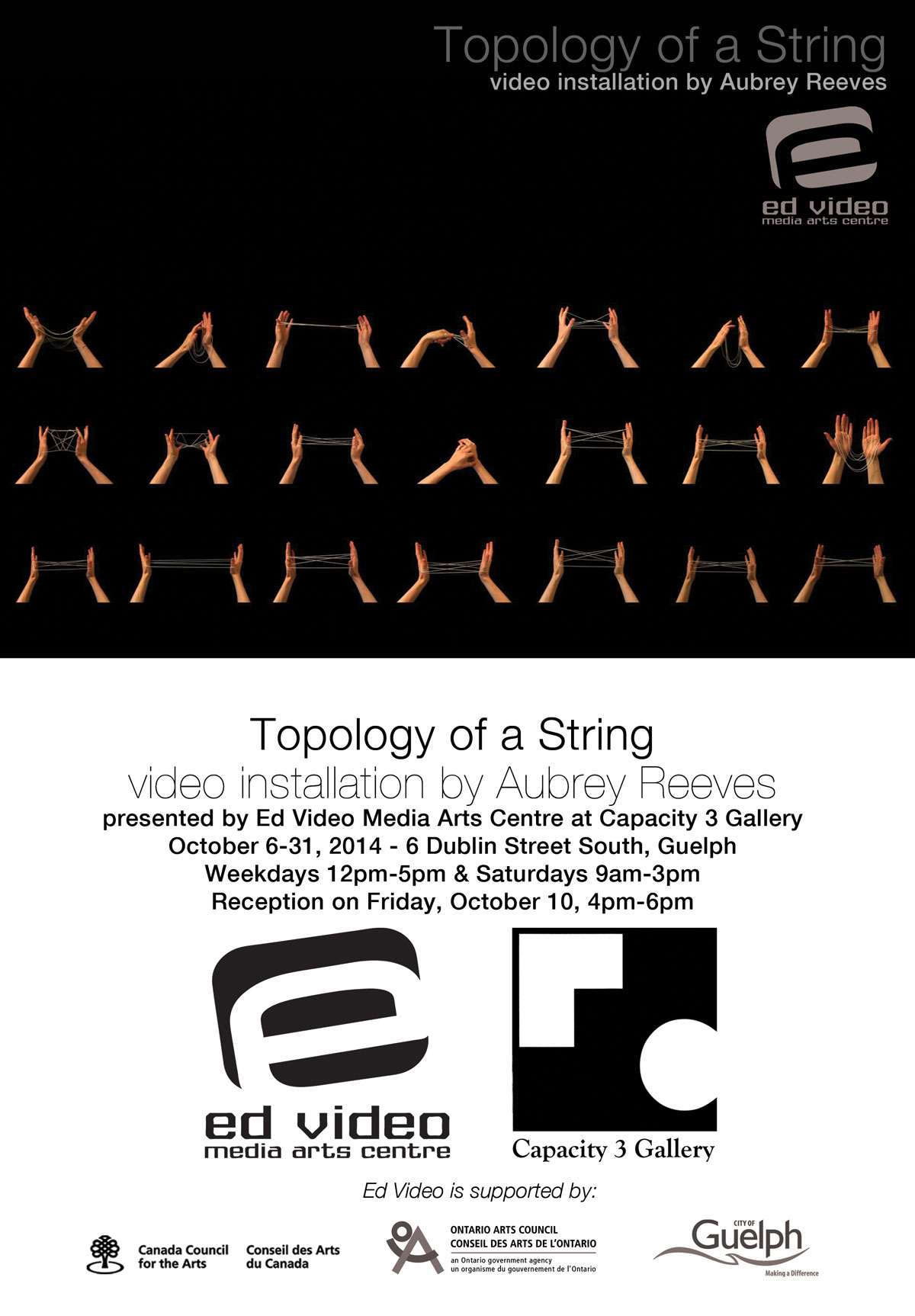 Topology of A String is a set of videos investigating permutations and possibilities of a
single continuous line in space. Without ever breaking the line, hundreds of variant
forms can be created by weaving the string over and under fingers, across the palms or
backs of the hands.
String games are an ancient form of entertainment shared by cultures the world over. In
the Asiatic-European version, the string is passed back and forth between two or more
players (what we know as Catʼs cradle), creating new shapes with each pass. The
American-Oceanic version is played solo to create shapes reminiscent of animals,
natural phenomena or human actions. In Topology of a String, the artists plays in this latter
tradition, creating seven different shapes.
This project links string games to the branch of mathematics called topology, which
developed out of geometry and set theory. Topology concerns itself with the properties
of space that are preserved under continuous deformations such as stretching, bending
or knotting. In Topology of a String, each sequence starts at the same opening position
yet a single change in the over-under pattern results in a completely different form. The
near infinite possibilities and the sheer complexity of forms that result from such a
simple starting point – a single closed loop of string – are truly astounding.
Topology of a String consists of seven short videos that play simultaneously on
continuous loops. The length of each video, ranging from approximately 40 seconds to 2
minutes, is determined by the time it takes to complete the weaving of each string
pattern. After the initial start point when all videos are synched, the loops move out of
synchronization. With seven different lengths of videos the number of permutations in
the installation is so large that it would actually take 701.5 days before all seven loops
synch to the starting point again. Thus, the overall installation creates a complex ever-changing
choreography of hands in motion.

Raised in New Brunswick, Aubrey Reeves is an artist, curator and arts manager based
in Toronto, Ontario, Canada. She holds a M.A. in Curatorial Studies from Bard College
in New York and a B.A. in Visual Arts and Arts Management from the University of
Toronto. Aubrey has shown her work internationally at the Kasseler Documentary Film
and VideoFest in Kassel, Germany and across Canada at Scotiabank Nuit Blanche,
Images Festival, Gallery 44 Centre for Contemporary Photography, the Art Gallery of
Hamilton, the Dunlop Gallery and Khyber ICA, among others. In 2014, she has shows at
A Space Gallery and at Harbourfront Centre. Aubreyʼs work has been recognized with
grants and awards from The Canada Council for the Arts, The Ontario Arts Council, The
Toronto Arts Council and the Liaison of Independent Filmmakers of Toronto. She was
recently awarded an OAC grant to create a new 16mm film called Lethe.